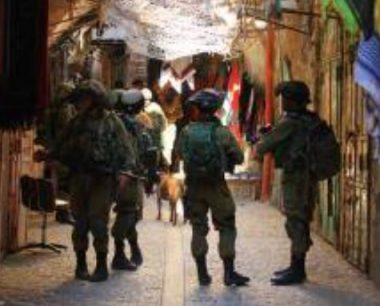 In Tulkarem, in the northern part of the West Bank, the soldiers invaded Nour Shams refugee camp, east of the city, and abducted Raja Ateyya Zayet, 23.

Furthermore, the soldiers invaded a residential building in the Eastern Neighborhood in Tulkarem, and smashed the doors of its flats, terrifying the families, before forcing them out and violently searching their residencies.

Following the search, the soldiers abducted one Palestinian, in his forties, and took him to an unknown destination.

In Jenin, also in northern West Bank, the soldiers abducted Tareq Arafat al-Hathnawi, after invading his family’s home and ransacking it. The army also invaded the home of Arafat’s brother, and another home owned by Abu Srour family.

In addition, the soldiers invaded Beit Kahel town, north of the southern West Bank city of Hebron, and abducted Haitham Azzat Asafra, 19, from his home.

The soldiers also invaded and searched a home, owned by Sa’id Abu Jaber, in al-Baq’a area, and many neighborhoods in Hebron city.

In related news, the army also installed many roadblocks at main roads leading to several towns, villages and refugee camps, in Hebron, before stopping and searching dozens of cars.

In Hebron’s Old City, the soldiers invaded officers run by the Palestinian Interior Ministry, Labor Ministry and Justice Ministry, and violently searched them.

Furthermore, the soldiers invaded several areas in occupied East Jerusalem, searched many homes and abducted eight Palestinians, including one from Qalandia refugee camp, north of the city.

Also at dawn, the soldiers invaded Deir Abu Mashal and Silwad towns, in the central West Bank governorate of Ramallah, and demolished three homes belonging to the families of two slain Palestinians, and a detainee, involved in attacks that led to the death of two Israeli soldiers.