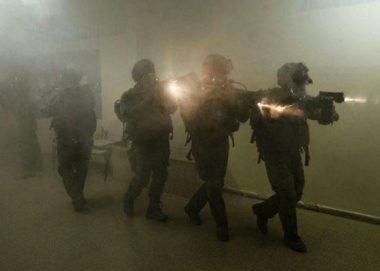 Israeli soldiers invaded, Thursday, a local mosque in the al-‘Ezariyya town, east of occupied East Jerusalem, after smashing its doors, and assaulted many worshipers before abducting three, in addition to causing damage in the holy site.

The soldiers smashed the main doors of the mosque, and assaulted many worshipers, before abducting three, and took them to an unknown destination.

Sheikh Yousef Ed’eis, the Minister of Waqf and Religious Affairs, said the attack is “another racist violation, part of a series of Israeli crimes against holy sites in occupied Palestine.”

He added that “the escalating Israeli crimes and constant violations against holy sites in Palestine prove that Israel is interested in escalating the fragile situation in the occupied territories, and is ongoing with its attempts to overtake Islamic holy sites.”

Ed’eis also stated that protecting the holy sites in Palestine is not just a Palestinian, Arab or Islamic responsibility, but is an international duty, especially since such assaults against places of worship violate various international agreements and human rights treaties.

While the military did not comment on the invasion into the holy site, and the abduction of the five worshipers, the army abducted, earlier Thursday, five Palestinians from Hebron governorate, during invasion carried out by the soldiers in al-‘Ezariyya.

The army said the five were abducted in a joint operation with the police and secret security agents, adding that the five, who remained unidentified, “were on their way to carry out an attack in Israel.”