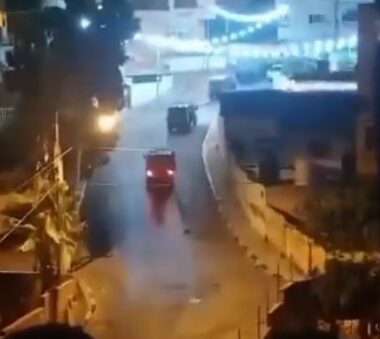 On Monday dawn, Israeli soldiers invaded many areas across the occupied West Bank, including the occupied capital, Jerusalem, searched and ransacked dozens of homes, and abducted at least thirty-three Palestinians in addition to shooting a young man.

In Jenin, in the northern part of the West Bank, several army jeeps invaded Sanur town, southwest of Jenin, before the soldiers broke into homes and abducted a young man, Hussein Mohammad Ayasa.

During the invasion, the soldiers searched the home of a lawyer, Abdul-Hakim Ayasa, and interrogated him.

In the Deheishe refugee camp, south of Bethlehem city, the soldiers abducted a former political prisoner, Nidal Na’im Abu Aker, 55, in addition to Bassel Da’amsa, 26, after invading their homes and ransacking them.

In Ramallah, in the central West Bank, the soldiers abducted Thaher Wajdi Safi, 17, from his home in the al-Jalazoun refugee camp north of the city.

In the Shu’fat refugee camp, east of occupied Jerusalem, the soldiers abducted Mohammad al-Hindi from his home.

In Silwan town in Jerusalem, the soldiers stormed and ransacked the home of Jerusalem governor Adnan Gheith before abducting him.

It is worth mentioning that the soldiers repeatedly abduct, interrogate and detain Gheith, and issue orders barring him from entering other parts of the occupied West Bank.

In related news, the soldiers shot one Palestinian with live fire and abducted two others in the Nablus governorate in the northern part of the occupied West Bank.

The soldiers assaulted one of the abducted Palestinians, Abdullah Abu Mariya, while abducting him, and also detained and interrogated more than ten other Palestinians and released him a few hours later.