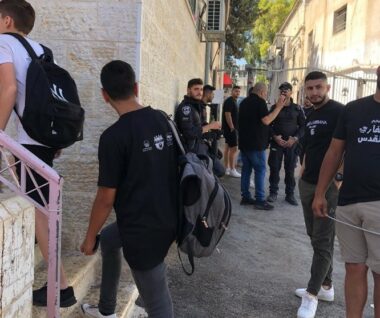 On Monday, Israeli soldiers invaded the Hilal al-Quds Athletic Club in the occupied capital, Jerusalem, in the West Bank, and searched it after forcing the Palestinians out.

Media sources said dozens of soldiers surrounded the area before storming the club and forcing the Palestinians out.

They said the soldiers pointed their guns at employees and several Palestinians, including children, before forcing them out of the facility.

The Hilal Al-Quds Athletic Club is a social, cultural, and athletic facility founded in 1972.

On Monday dawn, the soldiers invaded many areas across the occupied West Bank, including the occupied capital, Jerusalem, searched and ransacked dozens of homes, and abducted at least thirty-three Palestinians in addition to shooting a young man.

In related news, the soldiers shot one Palestinian with live fire and abducted two others in the Nablus governorate in the northern part of the occupied West Bank.