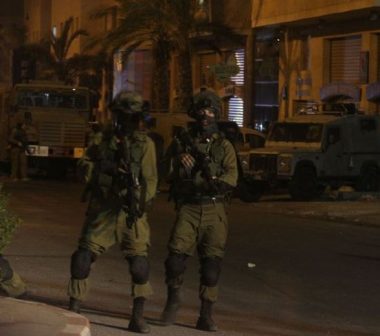 The PPS said the soldiers invaded and violently searched many homes in various governorates of the West Bank, before abducting twenty-two Palestinians, including two former political prisoners.

One of the abducted Palestinians is a high-school student, identified as Karim Jamal Khader, from the Sawiya village, south of Nablus, and was taken prisoner while leaving the educational facility on Monday afternoon.

It is worth mentioning that the soldiers interrogated Malaysha, 16 years of age for several hours, and released him later.

In addition, the soldiers abducted Khaled az-Zeer from Bab ar-Rahma historic graveyard, in the eastern side of the Al-Aqsa Mosque in Jerusalem, after he and several Palestinians managed to enter the cemetery despite the closure and siege around it, as it has been subject to frequent Israeli violations.

The graveyard, 23 Dunams, includes historic Islamic graves, many dating back 1400 years, but Israel is planning to confiscate large areas of the site for its “National Gardens” project.