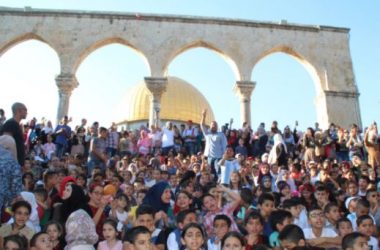 Israeli soldiers assaulted, Sunday, several young Palestinian men and women near the Al-Aqsa Mosque, especially at the Council Gate and the Chain Gate of the holy site, and abducted twelve of them, but released one later.

Eyewitnesses said the soldiers assaulted many worshippers, especially youngsters, as they were heading to the mosque, and leaving it, during a recreational activity for hundreds of children, dubbed as the “human train.”

They added that dozens of soldiers were deployed in the area, before abducting a young woman, identified as Mayyada Shawamra, in addition to abducting two young men after assaulting them.

The soldiers also sprayed many Palestinians, including guards of the Al-Aqsa Mosque, with pepper spray, and assaulted them before briefly detaining a guard, identified as Omar Rajabi, at a nearby police station.

In addition, the soldiers abducted a young man, identified as Tareq Moayyad Abu Mayyala, near the Council Gate, as he was trying to enter the mosque for evening prayers.

Late on Sunday evening, several Israeli army jeeps invaded Ein al-Louza neighborhood, in Silwan town, near Al-Aqsa Mosque, and fired dozens of rubber-coated steel bullets and concussion grenades, after the soldiers claimed that a car belonging to settlements’ guards was burnt, after Palestinian youngsters hurled a Molotov cocktail at it.