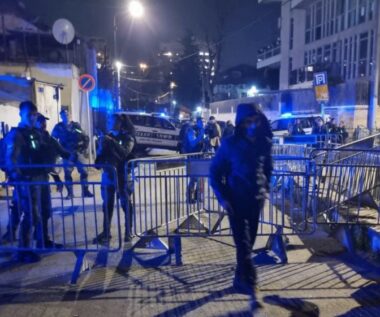 On Wednesday evening, Israeli soldiers attacked dozens of Palestinians and solidarity activists in the Sheikh Jarrah Palestinian neighborhood, in occupied Jerusalem, in the West bank.

Eyewitnesses said the soldiers invaded a Palestinian home and assaulted the family and the solidarity activists there.

They added that the soldiers also detained an international peace activist for several hours, in addition to imposing a strict siege on the neighborhood.

The attacks took place while large groups of fanatic illegal Israeli colonizers living on stolen Palestinian lands and property held a procession led by the fanatic member of Knesset Itamar Been Gvir, calling for expelling the Palestinians.

During the procession, the soldiers assaulted many Palestinians and abducted a child, Akram Abu Najma, the Wadi Hilweh Information Center In Silwan (Silwanic) said.

Dozens of families in the neighborhood face displacement from their homes for Israel’s illegal colonialist activities and are constantly subject to attack and serious violations by the soldiers and the colonizers.