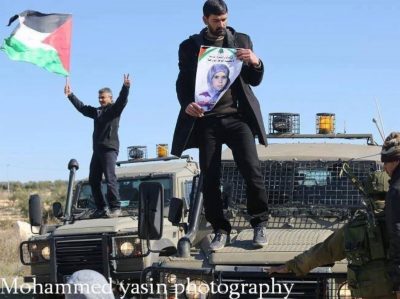 Many Palestinian, Israelis and international peace activists held, Friday, the weekly nonviolent protests in Bil’in village, in the central West Bank district of Ramallah, before Israeli soldiers assaulted them.

The Popular Committee against the Wall and Colonies in Bil’in said the soldiers intercepted the nonviolent protesters, and claimed that the village and its orchards have been declared a “closed military zone,” a claim the army frequently uses in various parts of occupied Palestine.

The soldiers then fired many gas bombs, and concussion grenades, causing many to suffer the severe effects of teargas inhalation.

Local nonviolent activist, Ashraf Abu Rahma, told the IMEMC that the nonviolent protests against Israel’s illegal Annexation Wall and colonies will continue despite the ongoing assaults and violations by the soldiers.

He stated that the protest this week was held by approximately 30 Palestinians, 10 Israelis and 10 international activists.

“I am sending this appeal, this message, to the entire world; we the Palestinians want to live in peace, justice and liberty,” Abu Rahma said, “The weapons and excessive use of force by the Israeli soldiers do not scare us, and will not prevent us from continuing our protests against the illegal Wall, colonies and the ongoing occupation of our lands.”

It is worth mentioning that Abu Rahma was repeatedly detained and imprisoned by Israel, and in 2008, a soldier shot him in his leg, after he was bound and blindfolded, and was ordered to stand behind their vehicle.

The incident was caught on film by a girl from Bil’in, and the soldiers later targeted her and her family

The free online CSS minimizer will compress the style files for your websites in seconds.