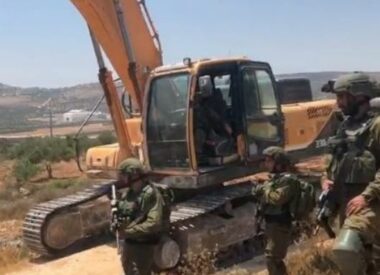 Israeli soldiers invaded, on Sunday afternoon, the ath-Thahrat area, north of Douma village, south of the northern West Bank city of Nablus, and confiscated a bulldozer while Palestinian workers were preparing for paving a new road.

Ghassan Daghlas, a Palestinian Authority official who monitors Israel’s colonialist activities in northern West Bank, said the bulldozer is owned by Mousa Zeineddin, and that the soldiers informed him that they will keep the bulldozer “until further notice.”

Daghlas added that the soldiers claimed that the new road, which is intended to be used by the villagers to reach their lands, is in Area C of the occupied West Bank, under full Israeli control.

Israel wants to fully annex large swaths of the occupied West Bank, especially the Jordan Valley, while the so-called “Deal of the Century.” Presented by U.S. President D. Trump, allows Israel to annex about 30% of the West Bank (which is in itself only 22% of historic Palestine) and pushing the Palestinians into the margins.

“Trump’s plan cuts all throughout the Palestinian territories, making it look like Swiss cheese—with the disconnected “holes in the cheese” being Palestine.  The non-contiguous land will be connected by tunnels and “safe roads” which will be controlled mainly by Israel.  It is a future of more checkpoints and closures, our freedom micromanaged by another people,” Rev. Dr. Jack Sara.

“Consisting of 80 pages, 50 of which are entirely dedicated to the plan’s economic component, the document was a rehash of previous Israeli proposals that have been rejected by Palestinians and Arab governments for failing to meet the minimum standards of justice, equality, and human rights.” Ramzy Baroud for the Palestine Chronicle.