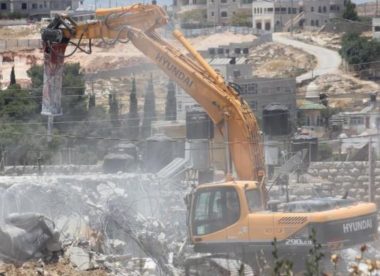 Nasr Abu Jaish, a member of the Political Bureau of the leftist Palestinian People’s Party (PPP), has reported that three Israeli army vehicles, and one bulldozer, invaded the town, after the soldiers surrounded it, and demolished the property.

He added that the demolished home, 100 square/meters, is owned by Riyad Hussein Raja, and that the soldiers demolished it under the pretext of being demolished without a permit.

It is worth mentioning that Beit Dajan is in “Area C” of the occupied West Bank, under full Israeli military and civil control.

Area C is more than 60 percent of the occupied West Bank and falls under the direct control of the “Civil Administration Office,” run by the Israeli military.

Almost all construction applications filed by the Palestinian, to build on their own lands in Area C, are denied by the Israeli authorities, an issue that forces dozens of expanding families to build without permits to accommodate their expanding families.

Meanwhile, all of Israel’s ongoing construction and expansion of illegal colonies in the West Bank, including in and around occupied East Jerusalem, and the Annexation Wall, continue to deny the Palestinians their basic rights, to build on their lands, in addition to the illegal annexation of their lands, while vast areas of agricultural farmlands and orchards, remained isolated.