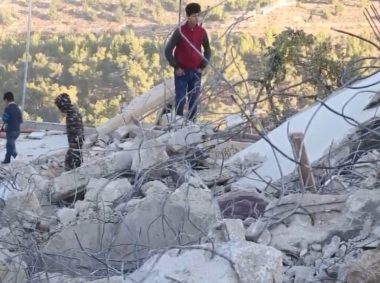 Israeli soldiers demolished, on Thursday at dawn, four Palestinian homes in Beit Kahil town, northwest of the southern West Bank city of Hebron; the demolished properties are owned by families of Palestinians accused of killing an Israeli soldier.

Many military jeeps, accompanied by armored bulldozers, invaded the town, and forced the families out of their homes.

Soldiers of the Engineering Corps then disconnected power and water lines, before proceeding with demolishing the four homes.

The army closed the entire area, and prevented the Palestinians, including journalists, from entering it.

The demolished homes are owned by the families of four detainees, identified as Hamad Aref Asafra, his brother Qassem Saleh Asafra, in addition to Nasseer Saleh Asafra and Yousef Atiya Zohour.

The Israeli army claims that the four were involved in killing an off-duty soldier, identified as Dvir Sorek, 19, near the illegal Migdal Oz colony, in the occupied West Bank, on August 9th 2019. Israeli sources said Sorek was part of a program that combines Torah studies and military service.

Israel’s policy of home demolition of Palestinians involved, or believed to be involved, in killing or attacking Israelis, including soldiers, is an act of illegal collective punishment that violates International Law and various international treaties, including the Fourth Geneva Convention.

The invasion and demolitions led to protests, and the soldiers fired a barrage of gas bombs, concussion grenades, rubber-coated steel bullets and rounds of live ammunition.