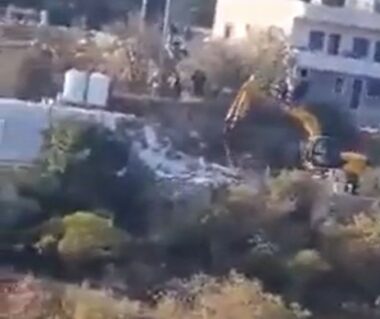 Khader Al-A’raj, the Mayor of Al-Walaja, said several army vehicles invaded the Ein Jweiza area after surrounding and isolating it.

He added that the soldiers demolished two homes, one owned by Othman Shweiki and one owned by Khitam Khalil Radwan.

The army claimed that two homes, about 120 square meters each, were built without a permit from the so-called “Civil Administration Office,” the administrative branch of Israel’s illegal occupation of Palestine.

The two homes were licensed by the local council and were built on lands owned by the two families.

Ein Jweiza is subject to constant Israeli violations, including the demolition of dozens of homes, retaining walls, agricultural sheds, and rooms, due to Israel’s illegal policies and colonialist activities.

The Israeli violations against al-Walaja started in the 1980s when Israel implemented its plans to annex the Palestinian lands to build its illegal colonies by denying all construction permits filed by the Palestinians, in addition to dividing the lands, zoning and designating large areas as “green zones,” to prevent the Palestinians from using them, not to mention surrounding them with the illegal Annexation Wall.