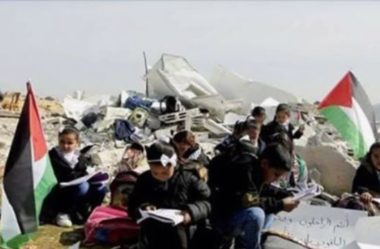 Israeli soldiers invaded, Monday, Thaher al-Maleh village, isolated behind the illegal Annexation Wall, west of the northern West Bank city of Jenin, and demolished a wall of a local school.

Omar al-Khatib, the mayor of Thaher al-Maleh, told the Palestinian News & Info Agency (WAFA), that a large military force, accompanied by armored bulldozers, invaded the area surrounding the Tahadi 17 School, and declared it a closed zone.

He added that the soldiers forcibly removed the Palestinians from the area and demolished a section of one of its external walls.

It is worth mentioning that the school is subject to frequently military invasions, in addition to various violations against the children, staff, and families.

Salam Taher, the principal of the school, denounced the Israeli violations and Israel’s constant breaching of various international and human rights treaties.

She added that the ongoing Israeli invasions and violation against many schools in the area, and across the West Bank, are clearly aimed at obstructing the educational process, and are made against facilities that are supposed to provide not only education but also a safe environment for them.