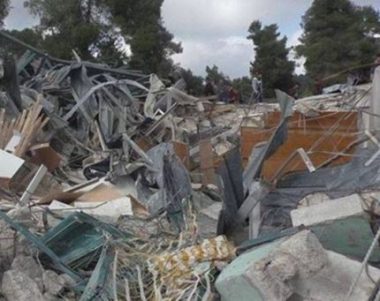 Several Israeli military vehicles invaded, on Monday at dawn, Bani Neim town, east of the southern West Bank city of Hebron, and detonated a two-story home belonging to the family of a Palestinian who was killed two months ago.

Eyewitnesses said that more than 30 military jeeps and vehicles, including an army bulldozer, invaded the town, after completely surrounding it.

They added that the soldiers then invaded the family home and forced them out, without allowing them to remove their furniture and belongings.

Soldiers of the Army Corps of Engineers then wired the building and detonated it, completely destroying it and causing damage to nearby homes.

The army first detained all residents of surrounding homes in one building, and released them after detonating the Tarayra home.

The invasion led to clashes between the soldiers and dozens of local youths who hurled stones and empty bottles at the invading vehicles, while the army fired concussion grenades and gas bombs; many residents suffered the effects of teargas inhalation.

The home belongs to the family of Mohammad Tarayra, 17, who was killed after infiltrating into an Israeli settlement in Hebron, and stabbing Hallel Yafffe Ariel, 13, causing very serious wounds that led to her death at an Israeli hospital shortly afterwards.

Israeli daily Haaretz said security guards of the settlement rushed to the home and broke its door, before the Tarayra stabbed one of them in the face, while another guard opened fire, and killed him.