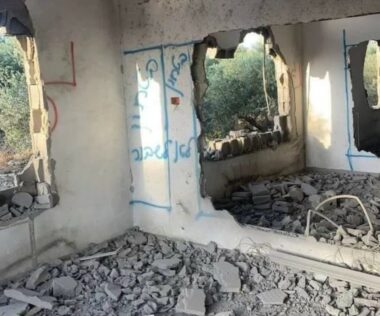 Israeli soldiers detonated, Saturday dawn, the home of a Palestinian detainee in the Silat al-Harithiya town, west of Jenin, in the northern part of the occupied West Bank.

Media sources said dozens of soldiers invaded the town, stormed the home of Omar Ahmad Jaradat, and wired its interior walls before detonating the property.

The sources added that the invasion was conducted by more than a hundred military vehicles, including Israeli Combat Engineering Corps members.

The invasion led to protests in the town before the soldiers shot three young men with live fire, causing moderate-but-stable wounds.

The soldiers also assaulted and injured a young man, Mohammad Nasser Abu Salah, while standing in front of his home before abducting him. Ahmad Yassin Jaradat, the father of three detainees, Montaser, Gheith, Omar, and Ahmad’s wife, who were all abducted in December, said the soldiers invaded the home approximately at 2:20 after midnight deploying sharpshooters on its rooftops.

He added that the soldiers also invaded more than 100 homes in the town and deployed sharpshooters on their rooftops.

The soldiers then invaded, ransacked the property, and wired the home before demolishing it.

The soldiers also forced all families in the surrounding homes to leave their properties during the detonation of the home.

“While Israel claims and tells the world about its so-called democracy, it continues to impose illegal collective punishment measures on entire families, punishing children, women, and elders,” he said, “Israel continues to violate International Law, continues its illegal, criminal, and unjust policies. It creates more determined generations to continue the liberation struggle; their punitive measures aren’t a deterrent but a motivation for continuing the fight for independence.

On April 6th, the Israeli Supreme Court approved the diction to demolish the home, stating that he was allegedly involved in the fatal shooting that led to the death of an Israeli colonizer, Yehuda Dimantman, 20, near Nablus, in the northern West Bank.

On December 20th, the army invaded the Jaradat family home and took measurements of the property in preparation for demolishing them. The army has already demolished two other homes owned by the family.