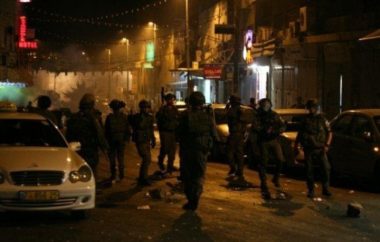 Israeli soldiers invaded, on Monday evening, the village of at-Tayba, west of the northern West Bank city of Jenin, and fired many gas bombs at homes, causing damage and injuries.

The head of at-Tayba Village Council, Khaled Jabarin, said the soldiers fired many gas bombs at homes, located near the illegal Annexation Wall, causing many Palestinians, including children, to suffer the effects of teargas inhalation, in addition to property damage.

Jabarin added that the soldiers frequently invade the village, and cause damage to homes, cars and property, in addition wounding many residents, including children, who usually suffer anxiety attacks and the severe effects of teargas inhalation, especially in the Western Neighborhood and the Northern Neighborhood, near the local high school.

The soldiers constantly invade the village, storm and ransack homes, in addition to abducting many residents, and threaten much harsher measures, including uprooting their orchards, especially the families living near the Wall, if the residents do not stop protesting against the illegal occupation, its wall and colonies.