Israeli Soldiers Illegally Confiscate Cash From A Home Near Jenin 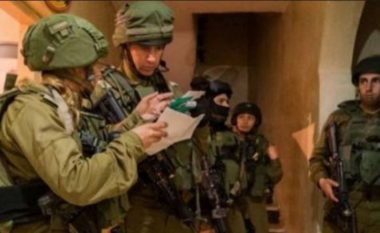 Israeli soldiers invaded, on Friday at dawn, a home of a former political prisoner in Barta’a town, south of the northern West Bank city of Jenin, before searching it and confiscating a large sum of cash. The soldiers also detained for several hours two young men and a teenage boy, near Jenin.

The Jenin office of the Palestinian Prisoners’ Society (PPS) said the soldiers invaded the home of Mohammad Nasser Alaqma, and interrogated him and his family, before illegally confiscating 10000 Shekels from the property.

It added that the soldiers invaded Kafrit village, southwest of Jenin, detained two young men, identified as Mohammad Salim and Laith Salem Abu Bakr, and released them after interrogating them for several hours.

The soldiers also detained a teenage boy, identified as Yousef Mahmoud ‘Obeid, from Sielet al-Harithiya town, northwest of Jenin, and interrogated him for a few hours for “standing near the Annexation Wall,” on town’s land, but later handed him to the Palestinian District Coordination Office.

In related news, the soldiers invaded Hebron city in the southern part of the occupied West Bank, Deir Samit, Beit Ummar and Beit Awwa nearby towns, searched many homes and stores, abducted four Palestinians, including three siblings, and confiscated silver.