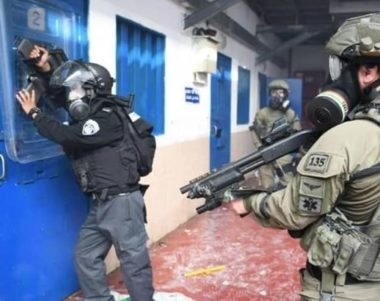 Dozens of Israeli soldiers attacked, on Monday evening, dozens of Palestinian detainees in Ofar Israeli prison, near Ramallah in the central West Bank, and fired many rubber-coated steel bullets, gas bombs and concussion grenades. They also hit the detainees with batons and used military dogs to attack them, wounding more than 100 detainees.

The Palestinian Prisoners’ Society (PPS) has reported that the soldiers began invasions and massive searches of the detainees’ rooms in the early morning hours on Monday, and assaulted many detainees, leading to protests by the imprisoned men.

The PPS added that the soldiers started firing rubber-coated steel bullets, gas bombs and concussion grenades, in addition to striking many detainees with batons and unleashing their dogs on them.

At least 100 detainees were injured, mainly after being shot with rubber-coated steel bullets from close range in their cells, before a number of them were moved to several Israeli hospitals.

Most of the wounded detainees were later return to the prison, while around twenty of them remained hospitalized fur further treatment.

At least three cells were burned during the Israeli invasions into them, possibly resulting from the firing of tear gas canisters at close range when the special prison forces stormed many of the cells.

The invasions into the cells came just one day after the soldiers stormed sections 17 and 15 of the prison, forcing the detainees out, and assaulted them while searching their rooms. There are approximately 1200 Palestinian political prisoners held at the facility.

The invasions and assaults were carried out by undercover Israeli soldiers from various units, including Dror, Metzada and Yamam units. The special forces targeted all ten sections of the prison, including the children’s branch.

The PPS stated that, in response to the invasions and assaults, the detainees have decided to send back their meals and barricade themselves in their cells. They are considering further measures, which could include a comprehensive hunger strike.

Furthermore, the PPS stated that this invasion and assault is the most violent in ten years, and warned that Israel might be planning further escalation against the detainees, under direct orders from Public Security Minister Gilad Erdan.

It warned that such an escalation could lead to fatalities among the detainees, due to the excessive use of force by the soldiers, similar to what happened at the Negev Detention Camp in 2007, when the soldiers shot and killed a detainee, identified as Mohammad al-Ashqar.

The PPS called on various human rights groups, including the International Red Cross, to intervene and demand that Israel stop escalating their violations against the detainees.