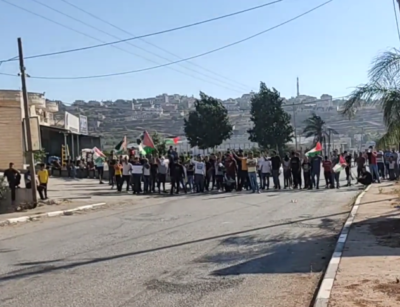 Israeli soldiers injured, on Thursday evening, 56 Palestinians during protests in Qusra and Beita towns, south of the northern West Bank city of Nablus. Ahmad Jibril, the head of the Emergency Department at the Palestinian Red Crescent Society (PRCS) in Nablus, said the soldiers shot 18 Palestinians with the rubber-coated steel bullets, and caused 33 to suffer the effects of teargas inhalation, in addition to causing cuts and bruises to three Palestinians, and two who fell while the soldiers were chasing them.

Local sources said the Palestinians were holding a nonviolent procession demanding the army to transfer the corpse of Mohammad Farid Hasan, 21, back to his family.

It is worth mentioning that Mohammad was shot and killed by Israeli soldiers who also injured 25 Palestinians, on July 3, 2021, in the southern area of Qusra. The army took his corpse and never transferred it back to the family.