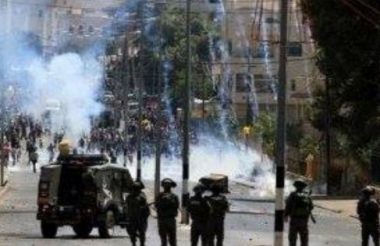 Bilal Tamimi, the media spokesperson of the Popular Committee against the Annexation Wall and Colonies in Nabi Saleh, said the soldiers invaded the village from several directions, and clashed with local youngsters, who hurled stones on the military vehicles.

Tamimi added that the soldiers fired many rubber-coated steel bullets, wounding a young man with two rounds in the chest and back.

The soldiers also invaded the homes of Naji Tamimi and Bassam Tamimi, and violently searched them, causing excessive damage, looking for their sons Anan and Wa’ad.

Nabi Saleh village is subject to constant Israeli military invasions and assaults, and continues its weekly nonviolent protests against the Annexation Wall and colonies, built on their own lands.

On Monday at dawn, the soldiers abducted a young man in Qalqilia city, in the northern part of the occupied West Bank, in addition to a child and two siblings from Teqoua’ town, east of Bethlehem.

In Hebron, in the southern part of the West Bank, the soldiers invaded several communities and neighborhoods, searched many homes and abducted five Palestinians.

Also at dawn, the soldiers abducted four young Palestinian men in Far’un village, south of Tulkarem, in the northern part of the occupied West Bank.

In related news, the soldiers abducted, overnight until early morning hours Monday, at least five Palestinians during massive invasions and violent searches of homes in the Old City of occupied East Jerusalem.