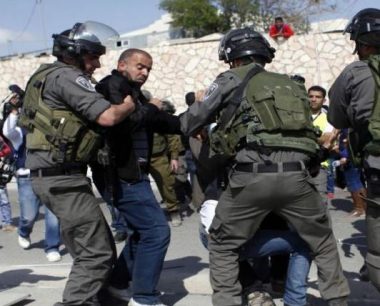 Israeli soldiers invaded, Monday, the town of Silwan, south of the Al-Aqsa Mosque, in occupied East Jerusalem, and abducted a 65-year-old man, the father of a Palestinian teen who was killed by the army in 2012.

The soldiers invaded Sweih neighborhood, in Silwan, broke into the home of Sa’id Ayyash, 65, abducted him before taking him to the al-Maskobiyya interrogated facility.

It is worth mentioning that the abducted man is the father of Milad Sa’id Ayyash, 17, who was killed, on May 14 2011, by a bullet fired by an Israeli colonialist settler in “Yonatan” illegal outpost, in Batn Al Hawa neighborhood, in Silwan.

On Monday at dawn, the soldiers abducted a young man in Qalqilia city, in the northern part of the occupied West Bank, in addition to a child and two siblings from Teqoua’ town, east of Bethlehem.

In Hebron, in the southern part of the West Bank, the soldiers invaded several communities and neighborhoods, searched many homes and abducted five Palestinians.

Also at dawn, the soldiers abducted four young Palestinian men in Far’un village, south of Tulkarem, in the northern part of the occupied West Bank.

In related news, the soldiers abducted, overnight until early morning hours Monday, at least five Palestinians during massive invasions and violent searches of homes in the Old City of occupied East Jerusalem.