Israeli Soldiers Injure Fifteen Palestinians, Including Medics And A Journalist 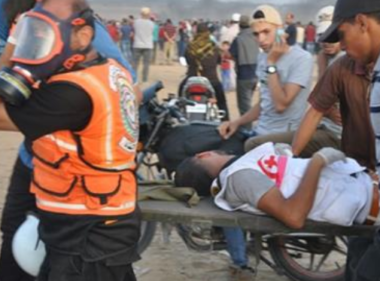 Israeli soldiers injured, Friday, at least fifteen Palestinians, including one doctor and six paramedics, during the Great Return Match processions in the besieged and impoverished Gaza Strip, after the army resorted to the excessive use of force against the nonviolent protesters, holding the weekly processions for the 41st consecutive week.

The Palestinian Health Ministry has reported that the soldiers shot fifteen Palestinians, including six paramedics, one doctor and one journalist, after targeting them with live fire and high-velocity gas bombs.

It added that the soldiers shot Mohammad Abu Kashef, a medic with the Palestinian Medical Relief Society (PMRS), with a high-velocity gas bomb, fracturing his arm, east of Jabalia, in the northern part of the Gaza Strip.

The soldiers also shot Rafi Shaldan, a medic with the PMRS, with a high-velocity gas bomb in his pelvis, east of Gaza city.

In addition, the soldiers shot another medic, identified as Mohammad Abu T’eima, with a gas bomb in his head, east of Khan Younis, in the southern part of the Gaza Strip.

Many Palestinians suffered the severe effects of teargas inhalation, in addition to various cuts, bruises and burns.

The army resorted to the excessive use of force against the Palestinians along the perimeter fence, east of Gaza city, the al-Boreij refugee camp in central Gaza, in addition to Khan Younis and Rafah in the southern part, and Jabalia in northern Gaza.

In a statement, the head of the Palestinian Medical Relief Society, Dr. Mustafa Barghouthi, strongly denounced the ongoing and escalating Israeli excessive use of force against the unarmed civilians, medical teams and journalists.

Dr. Barghouthi stated that the soldiers injured six of the PMRS medics in several parts of the Gaza Strip, Friday, while they were performing their humanitarian duties in providing the urgently needed medical aid to wounded Palestinians.

Dr. Barghouthi denounced these escalating violations, and said the soldiers have killed three medics, and injured dozens, since the Great Return March nonviolent processions started on the Palestinian Land Day, March 30th, 2018, and called on the International Community to hold Israel accountable for its crimes and violations of basic human rights, including its deliberate targeting of medics and journalists.

Last Friday, December 28th 2018, the soldiers killed one Palestinian civilian with disability, and injured eighteen others, including four children and two paramedics.

On Friday, December 21st, the soldiers killed three Palestinians, including one child, and injured 115 others, including two journalists and four medics, in Gaza.

It is worth mentioning that the soldiers have killed three medics identified as Razan Najjar, 22, Mousa Jaber Abu Hassanein, 36, and Abdullah al-Qutati, 20,  in addition to Photojournalist Yasser Mortaja, and journalist Ahmad Abu Hussein, in the Gaza Strip, and injured dozens of journalists, since the Great Return March processions started on Palestinian Land Day, March 30th 2018.

On December 27th, 2018, the United Nations Office for the Coordination of Humanitarian Affairs (OCHA) has reported that a total of 295 Palestinians were killed, and over 29,000 were injured in 2018 by Israeli forces.

OCHA added that this is the highest death toll in a single year since the Israeli war on Gaza in the summer, of 2014 and the highest number of injuries recorded since OCHA began documenting casualties in the occupied Palestinian territories in 2005.

Across the occupied territories, 57 of the Palestinian fatalities and about 7,000 of the injuries were under 18 years of age. A total of 14 Israelis were killed during the year by Palestinians, and at least 137 others were injured.