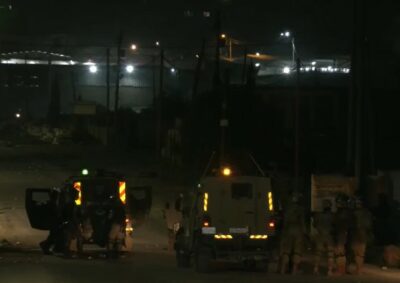 The head of Beita Town Council, Mahmoud Barham, said dozens of soldiers gathered at the main entrance of Beita and closed it.

He added that many Palestinians protesting the invasion before the soldiers fired a barrage of gas bombs, concussion grenades, and rubber-coated steel bullets.

The soldiers also detained and assaulted two Palestine TV journalists, Shadia Bani Shams and Abbas Khabisa, and hurled insults at them while pushing them away and trying to prevent them from documenting the ongoing invasion.

Shadia said the soldiers were cursing at her and were trying to force her and her team to leave the area and stop documenting the unfolding events.

The soldiers were still gathered in the dozens at the entrance of Beita at the time of this report and were apparently preparing to invade the town.

On Thursday evening, the Palestinian Health Ministry confirmed the death of Fawwaz Hamayel, 36, who was shot and seriously injured, Wednesday when the Israeli soldiers with an expanding bullet in Beita.

On Wednesday morning, the soldiers killed a Palestinian lawyer, Mohammad Hasan Assaf, 34, after firing many live rounds at his car in the Industrial Area in Nablus city.

The soldiers also injured more than twenty-five Palestinians after shooting them with live rounds and rubber-coated steel bullets in several villages and towns in Nablus.

On Wednesday evening, the soldiers killed a child, Qussai Fuad Hamamra, 14, in Husan village, west of Bethlehem, in the occupied West Bank. The child was killed not far from where the Israeli soldiers killed Ghada Ibrahim Ali Sabateen, 48, on April 10, 2022.