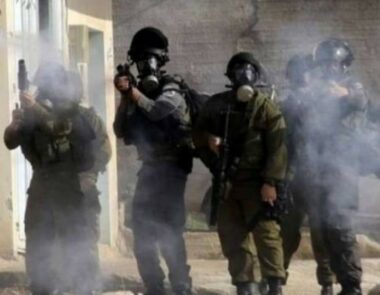 Israeli soldiers injured, Tuesday, dozens of Palestinians, including schoolchildren, at the main entrance of the al-‘Arroub refugee camp, north of the southern West Bank city of Hebron.

Eyewitnesses said several army jeeps invaded the area, especially near the Al-‘Arroub Highschool for Boys, and attacked dozens of Palestinians who were holding a nonviolent procession in solidarity with the detainees, and chanting for liberation and independence.

They added that the soldiers fired many gas bombs and concussion grenades, causing scores of residents, including children, to suffer the effects of tear gas inhalation.

In related news, Israeli colonizers infiltrated the Industrial Zone in al-Biereh city in central West Bank, before puncturing the tires of three Palestinian cars, and wrote racist graffiti on several cars and walls.

On Tuesday at dawn, the soldiers abducted three Palestinians in Hebron and Bethlehem, in the occupied West Bank.