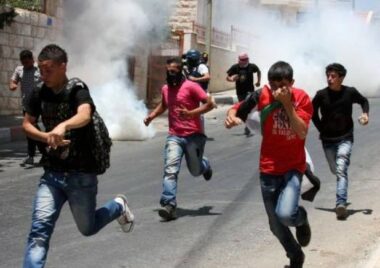 On Sunday, Israeli soldiers injured many schoolchildren in Tuqu’ town southeast of Bethlehem in the occupied West Bank.

Local nonviolent activist Mustafa Badan said the soldiers attacked many school children in the schools’ area of the town while trying to force them to leave.

Badan added that the soldiers fired many gas bombs and concussion grenades, causing many children to suffer the effects of tear gas inhalation.

The soldiers also attacked a few schoolchildren and detained three of them.

It is worth mentioning that the soldiers frequently invade the schools’ area in the town, especially in the morning and in the afternoon.