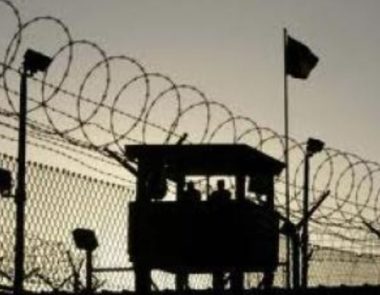 April 17th marks Palestinian Prisoner’s Day – and a coalition of Palestinian prisoner advocacy groups issued a report about the current status of Palestinian political prisoners. Israeli authorities currently have imprisoned 4450 prisoners, including 32 female prisoners, 160 children under the age of 18, and 530 held without any charges in direct violation of internal law, under so-called ‘administrative detention’.

A fact sheet issued by the Prisoners’ Society on the occasion of Palestinian Prisoners’ Day, stated that from the beginning of 2022 until the end of March, Israeli troops abducted more than 2,140 male and female citizens, concentrated in the governorates of Jerusalem and Jenin. Among those detained in 2022 are more than 200 children and more than 35 women.

The paper indicated that the abductions escalated during the month of March with the beginning of the Islamic Holy month of Ramadan, and reached their climax on April 15, when Israeli forces carried out large-scale arrests during the storming of Al-Aqsa Mosque, when troops abducted more than 450 Palestinians, including children.

The prisoners’ society indicated that the number of sick prisoners reached more than 600, of whom 200 were diagnosed with chronic diseases, including 22 prisoners with cancer and tumors of varying degrees, the most severe of which was the prisoner Nasser Abu Hamid, who is facing a serious health situation, as a result of lung cancer.

Among the most prominent names of the sick prisoners who are in the Ramle Clinic prison are: Khaled Al-Shawish, Mansour Muqada, Mutassim Raddad, Nahed Al-Aqra’, Nasser Abu Hamid, and Iyad Haribat. Most of them have been languishing since the date of their arrests up to 20 years prior, in the Ramle Clinic prison. This is the prison that the prisoners call “the slaughterhouse” and is considered one of the worst and oldest prisons.

Some of the cases that have been diagnosed with tumors since the end of last year include the prisoners: Nasser Abu Hamid, Iyad Nazir Omar, Jamal Amr, Mahmoud Abu Warda, and Musa Soufan, in addition to Abdel Basset Maatan, who was administratively arrested during his treatment of cancer, and is still under administrative detention. .

The number of prisoners who are serving life sentences is 549, the most severe of which is the prisoner Abdullah Al-Barghouti, who is sentenced to 67 life imprisonments.

As part of its systematic policies, Israeli authorities continue to detain the bodies of 8 prisoners who died in prison, identified as: Anis Doula, who died in Ashkelon prison in 1980, Aziz Owaisat in 2018, Fares Baroud, Nassar Taqatqa, and Bassam al-Sayeh, all four of whom died during 2019. Saadi Al-Gharabli and Kamal Abu Waer, who died in 2020, and Sami Al-Amour, who died in 2021.

The number of former prisoners detained prior to the signing of the Oslo Agreement reached 25, the oldest of whom were Karim Younis and Maher Younis, who have been detained since January 1983 on a continuous basis, and the prisoner Nael Barghouti, who is serving the longest period of detention in the history of the captive movement, and entered his 42nd year in prison. He spent 34 years in prison continuously, before his liberation in 2011. But he was re-arrested in 2014 along with a group of dozens of others, including Alaa Al-Bazin, Nidal Zalloum and Samer Al-Mahroom.

In addition to the prisoners who were detained before the signing of the Oslo Accords, dozens of prisoners were arrested during the Al-Aqsa Intifada in 2000. There are 152 prisoners whose years of detention exceeded 20 years.

The number of former Parliament Members detained in the prisons of the occupation reached 8, including the two prisoners Marwan Barghouti and Ahmed Saadat. In addition, 11 journalists remain detained in Israeli prisons.

32 Palestinian women are currently being held in Damoun prison, the oldest of whom is Maysoon Musa from Bethlehem, who has been detained since 2015, and has been sentenced to 15 years in prison.

The number of Palestinian child prisoners in Israeli prisons is 160. The children are being held in Megiddo, Ofer, and Damoun prisons.

This year has witnessed a significant shift in the number of solitary confinement prisoners, and their number reached 29 in the end of March – including the six prisoners who had successfully escaped from Gilboa prison in 2021.

Among the isolated prisoners are prisoners who suffer from severe psychological problems, as a result of the systematic abuse and torture they have been subjected to over the years. The oldest isolated prisoner is Mohammed Khalil from the town of Mazraa al-Gharbiyye near Ramallah, who has been in solitary for more than 15 years.

During the current year, dozens of detainees were subjected to severe torture and interrogation by Israeli forces – despite the condemnation of the international community of the practice of torturing prisoners.

In addition to the aforementioned policies, the policy of “collective punishment”, and the repeated incursions and inspections of the cells of Palestinian prisoners have increased this year, leading to an increase in confrontations between the prisoners and guards which resulted in widespread repression and attacks against the prisoners.

Since the beginning of this year, Israeli authorities have issued about 400 administrative detention orders against detainees, most of whom are ex-prisoners who were arrested several times, and the highest number was during the month of March 2022, when 195 orders were issued.

The 500 administrative detainees announced at the beginning of this year a boycott of all levels of occupation courts (confirmation courts, appeals, and the Supreme Court) in order to confront the policy of arbitrary administrative detention, and to confirm the arbitrary nature of Israeli courts that implement the decisions of the intelligence service and are subject to its will to keep prisoners imprisoned for indefinite periods of time.

This paper, prepared by the Prisoners’ Affairs Authority, the Prisoner’s Club, the Addameer Foundation, the “Hurriyat” Center, and the Wadi Hilweh Center – Jerusalem, comes on the occasion of the Prisoner’s Day, which falls on April 17 of each year, and which was approved by the National Council, in 1974, during its session. This is a day to unify efforts and activities to support the Palestinian prisoners. and support their legitimate right to freedom.