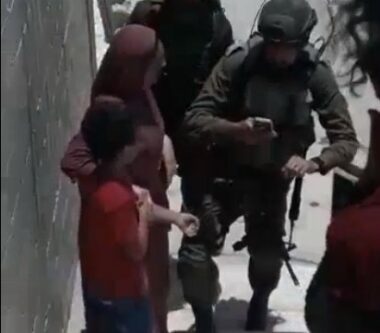 On Saturday, Israeli soldiers injured a Palestinian woman and caused many residents to suffer the effects of tear gas inhalation during a nonviolent procession protesting a quarry of an illegal Israeli colonizer in Kisan village, east of Bethlehem in the occupied West Bank.

Mohammad Ghazal, a local nonviolent activist, said the Palestinians held a peaceful procession on their lands demanding the removal of the stone cutting facility from their privately-owned lands, which also devastates their agricultural lands and livestock.

Ghazal added that the soldiers fired many gas bombs at the Palestinians, shooting an elderly woman, Sa’ada Obeyyat, with a gas bomb on the leg and causing many Palestinians to suffer the effects of tear gas inhalation.

The soldiers also detained the head of Kisan Village Council, Mousa Obeyyat, 33, and his child Hasan, only seven years of age, who was terrified and crying when the soldier dragged him away from his mother.

Kisan witnesses repeated Israeli violations, including the theft of its lands and the constant attacks by the soldiers and the colonizers against the Palestinians, especially the farmers, the shepherds, and even the elderly.