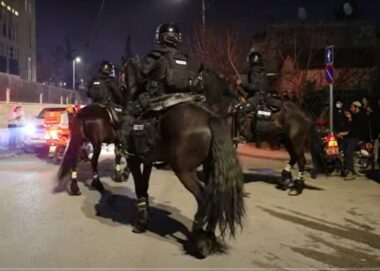 He added that the soldiers abducted three other young men, who remained unidentified, and moved them to an interrogation facility.

The Palestinian Red Crescent Society (PRCS) said the soldiers injured thirty-one Palestinians, including a child and a young man who suffered a concussion from concussion grenades.

The PRCS added that four Palestinians suffered bruises, four were shot with rubber-coated steel bullets, and three were maced with pepper spray.

The PRCS added that six of the wounded Palestinians required hospitalization and stated that three medics, a female journalist, and two international peace activists were among the injured.

The escalation in Sheikh Jarrah started on Sunday morning when a far-right member of Knesset Itamar Bin-Gvir invaded the western area of Sheikh Jarrah, and went to the illegal colonialist outpost where he set up a make-shift parliamentary office on land owned by the Salem family that faces eviction from their home.

Bin-Gvir was accompanied by many extremists, including the Deputy Mayor of Jerusalem Aryeh Yitzhak King and Baruch Merzel.

Groups of fanatic Israeli colonizers also attacked many Palestinians, including Salem family members, and threw chairs at them, assaulted them, and maced many before the soldiers abducted Khalil Salem, who the colonists also injured.

The PRCS added that most of the wounded were shot with rubber-coated steel bullets, in addition to many who suffered burns from the concussion grenades and others who were assaulted and beaten by the soldiers.

Six of the wounded were rushed to hospitals to receive further medical treatment, while the rest received the needed aid by field medics.

The attacks started after the soldiers closed the western entrance of the neighborhood with iron barriers and forced the Palestinian and international solidarity activists away from the Salem family home, which was illegally confiscated to be given to illegal Israeli colonizes.

Before abducting seven, the soldiers attacked the Palestinians and solidarity activists with gas bombs, concussion grenades, and rubber-coated steel bullets. Since Saturday evening, the number of abducted Palestinians in the neighborhood has arrived at thirteen.

While the soldiers continued to attack the Palestinians and peace activists, they allowed large groups of fanatic Israel colonizers to march while chanting to expel the Palestinians from their homes.

It is worth mentioning that the Israeli colonizers also assaulted Arab Members of Knesset of the Joint List after they arrived in the neighborhood in solidarity with the Palestinians.