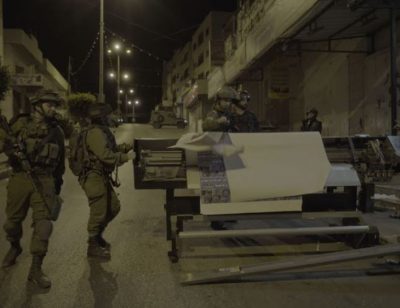 Israeli soldiers invaded, on Thursday at dawn, a print shop in the al-Ram town, north of occupied East Jerusalem, violently searched it, and confiscated all of its equipment, and printed materials.

The Israeli army released a statement confirming the invasion and confiscation, and also alleging that the print shop “produced incitement materials,” after printing posters of Misbah Abu Sbeih, who was killed by the army, on October 9th, after carrying out a drive-by shooting in Jerusalem, killing two Israelis and wounding six others.

The army said it confiscated the equipment from the print shop, and also claimed to find more materials that were regarded as incitement, including posters located in Abu Sbeih’s home, and various homes that were invaded and searched by the military after the shooting.