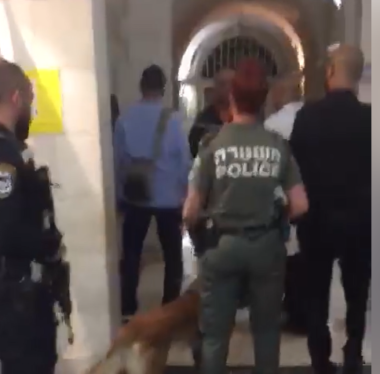 Israeli soldiers and police officers stormed, on Sunday evening, Augusta Victoria Hospital, in the at-Tour neighborhood, in occupied East Jerusalem, and searched the cancer ward of the medical facility, terrorizing many patients while reportedly “looking for weapons.”

The WAFA Palestinian News Agency the soldiers invaded the patients’ rooms, and various facilities in the hospital, allegedly looking for weapons, and used their dogs during the violent search, terrorizing the patients.

Palestinian Health Minister, Dr. Mai al-Kaila, denounced the invasion into the hospital and said that this attack is a serious violation to various international human rights agreements, especially those that deal with protecting civilians and medical facilities.

She said that the invasion, carried out by heavily armed and armored soldiers and police officers, and included the use of the military dogs in the medical center, is yet another example of Israel’s disregard of medical facilities and the patients.

Dr. al-Kaila added that Israel continues to violate international laws and treaties, and escalates its crimes, due to the deadly silence of the international community and the lack of accountability.