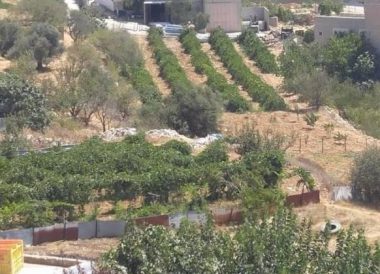 The Israeli “Civil Administration Office,” run by the Israeli army in the occupied West Bank, issued a military order for the illegal annexation of half a Dunam of Palestinian agricultural land, in Beit Ummar, north of the southern West Bank city of Hebron.

The soldiers confiscated half a Dunam of land (0.12 Acres) in Sider az-Zeitouna area, in the opposite direction of a military tower which was installed by the army at the main entrance of the town.

The confiscation order states that the army will use the land for “security considerations,” and to “installed a power transformer,” to provide electricity for the military observation tower.

The lands are privately owned by Ahmad and Mahmoud Younis Abu Ayyash, from Beit Ummar town.

Mahmoud said he filed an appeal with the Palestinian District Coordination Office, which in turn would hand it to the Israeli side, but the army said that it needed the land to install a power transformer “to provide the military observation tower with electricity.”

Three years ago, the army illegally confiscated 200 meters of the same land to expand the “security zone” of the military tower.

The land in questions has been off-limits to the Palestinians, who have been denied access to it, even to plant it, since the year 2001.