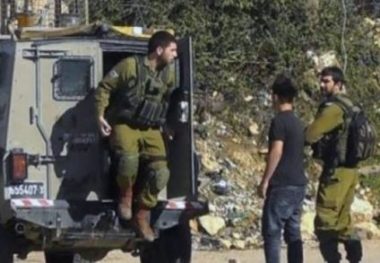 Israeli soldiers kidnapped, on Saturday evening, a Palestinian police officer, and detained several Palestinians, after stopping them at a military roadblock on the main entrance of Zababda town, southeast of Jenin, in the northern part of the occupied West Bank.

Eyewitnesses said the soldiers kidnapped a Palestinian police officer, identified as Montaser Mohammad Abu ‘Arra, 35, after stopping on at the roadblock, and took him to an unknown destination.

The soldiers also detained and interrogated many young Palestinian men while inspecting their ID cards, in addition to stopping and searching dozens of cars.

Also on Saturday evening, a Palestinian child identified as Lama Marwan Mousa, only six years of age, was killed after being rammed by a speeding Israeli colonist’s car in Um Rokba area, in the al-Khader town, south of the West Bank city of Bethlehem.