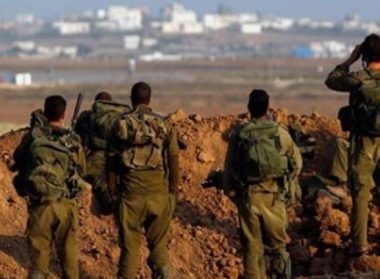 Israeli soldiers killed, on Monday afternoon, a young Palestinian man with live fire, east of Khan Younis, in the southern part of the Gaza Strip.

The soldiers opened fire at several young men, who approached the border fence, seriously wounding one of them, before abducting him, while the rest managed to escape unharmed. The wounded Palestinian died from his serious injury shortly after being detained.

Israeli Ynet News claimed the soldiers killed “one of two Palestinians who attempted to cross the fence,” and added that “they were found to be carrying an ax.” The slain Palestinian’s identity remains unknown.

|The Palestinian was later identified as Ramzi Najjar|

The vehicles advanced at least 150 meters into Palestinian agricultural lands, and bulldozed them, in addition to placing sand hills and more barbwire fences.

On Sunday, the soldiers shot and injured a Palestinian man after he allegedly approached the barbed-wire fence, to the east of Khan Younis.

On the same day, the Palestinian Health Ministry in the Gaza Strip  said that a young Palestinian man, identified as Mohammad Na’im Hamada, 30, who was shot and seriously injured by Israel army fire, on May 14, has succumbed to his wounds.

On Friday, the soldiers killed a young Palestinian woman, a medic identified as Razan Ashraf Najjar, 22, and injured 100 Palestinians, including 40 with live fire.

Razan was the second medic to be killed by Israeli army fire since March 30th, after the soldiers killed Mousa Jaber Abu Hassanein, 36, who was shot on May 14th, while wearing a clearly marked medic vest.

In the West Bank, the soldiers killed, on Saturday June 2nd, a Palestinian worker, identified as Rami Wahid Sabarna, 36, in Hebron, while he and other workers were conducting work for the Hebron City Council to rehabilitate and expand a road near the Ibrahimi Mosque.

Dr. Ashraf al-Qedra, the spokesperson of the Health Ministry in Gaza, said in Twitter and Facebook posts that the soldiers have killed 123 Palestinians, including 13 children, and injured 13672 others, including hundreds of suffered serious wounds, mainly after being shot with expanding bullets, since March 30th.

He denounced the Israeli army’s use of sniper fire to kill and main the protesters, and for using gas bombs of unknown components that cause serious complications, impacting the neurological and the respiratory systems.

Dr. al-Qedra also said that, besides killing the two medics, the soldiers injured 223 others, and caused damage to 37 ambulances, in addition to targeting Palestinian journalists, killing two, identified as Yasser Mortaja and Ahmad Abu Hussein, in addition to wounding 144 others.