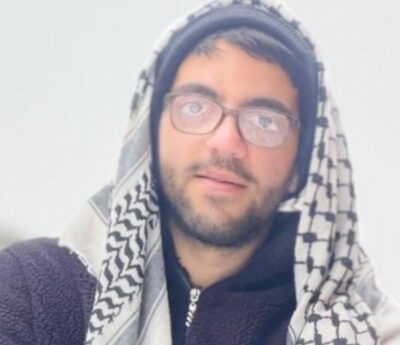 On Tuesday evening, Israeli soldiers killed a young Palestinian man at the main entrance of Beit Fajjar town, south of Bethlehem in the occupied West Bank.

It added that the slain young man is from the al-‘Arroub refugee camp, north of Hebron, in the southern part of the occupied West Bank.

After shooting the young man, the soldiers prevented Palestinian medics from reaching him before he bled to death. The soldiers wrapped his body with a plastic sheet and took it to an unknown destination.

According to Israeli soldiers, the soldiers “observed the young man hurling stones towards their direction and shot him.”

His cousin described what happened as an assassination, especially since Ammar wasn’t posing any threat, and there were no protests in the area.

“He was just out there walking in the mountain area, the only place for us in the refugee camp to observe nature….”, he added, “Ammar was doing well in college. He also was an outgoing person; however, the soldiers decided to shoot him without any cause of justification, especially since the area was calm, and no protests were taking place….”