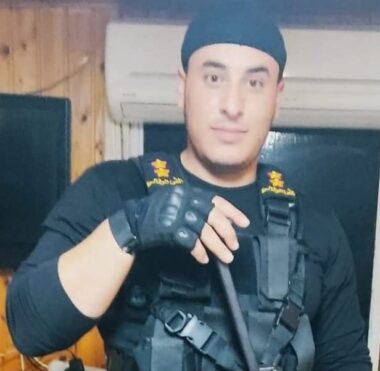 Israeli soldiers killed, on Wednesday at night, a Palestinian security officer near the town of Tal, south of Nablus, in northern West Bank, after the army claimed he opened fire at the soldiers.

Palestinian sources have confirmed that the slain man, an officer with the Palestinian Intelligence Service, has been identified as Mohammad Omar Sa’id Najjar, 36, from the Ras al-Ein area in Nablus city.

According to the army, the Palestinian drove his car to a military roadblock and opened fire at the soldiers, wounding two, before they shot him.

The army closed the entire area after declaring it a closed military zone, and forced the Palestinians away, before an Israeli ambulance arrived at the scene, provided treatment to the wounded soldiers, and took them to a hospital.

Palestinian medics also rushed to the area, but the soldiers refused to allow them through to provide treatment to the Palestinian who apparently was still in a serious condition. The corpse of the slain officer remained with the army.

It is worth mentioning that the soldiers initiated extensive invasions into surrounding Palestinian areas.

In related news, the soldiers invaded, on Wednesday evening, the towns of Zeita, Nazlet Issa, and Baqa ash-Sharqiya, near the northern West Bank city of Tulkarem, and attacked Palestinian protesters, wounding five with live fire in their limbs.

In the Gaza Strip, Israel continued its offensive and assassinated a senior leader of the Al-Qassam Brigades, the armed wing of Hamas, identified as Bassem Issa, also leading to the death of other Palestinians.

On the same day, the soldiers fired missiles and shells targeting homes, residential towers, infrastructure, and various other facilities, killing at least twenty Palestinians in several parts of the besieged and impoverished Gaza Strip.

In a recent Israeli strike on Gaza, on Wednesday night, the army killed two children, identified as Mariam Mohammad Odah at-Tilbani, 3, and her brother Zeid, 5, in their home in Tal al-Hawa neighborhood, in Gaza city.

The number of Palestinians, killed by Israeli missiles and shells in the last two days since Israel began its offensive on Gaza, is more than 66, including sixteen children and five women, in addition to the injury of at least 365 Palestinians.