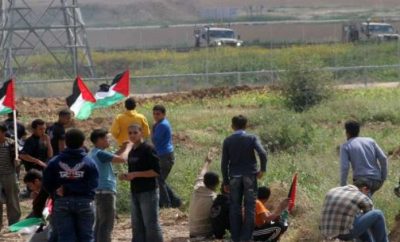 The Palestinian Health Ministry said the teen, seventeen years of age, was shot with a live round in the abdomen, and is currently in a moderate condition, at the Al-Aqsa hospital, in Deir al-Balah nearby city.

The teen was injured after Israeli soldiers opened fire on Palestinians, protesting near the border fence, and burnt tires before the army started firing live rounds on them.

Eyewitnesses said that the soldiers, stationed at a military base across the border fence, east of the refugee camp, fired many live rounds at Palestinian protesters, leading to clashes.

In related news, the soldiers also fired live rounds and gas bombs at Palestinians protesting near the border fence, east of the Sheja’eyya neighborhood, in the eastern part of Gaza city.