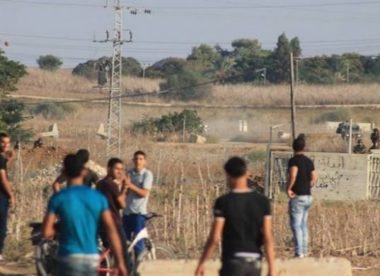 Medical sources said the soldiers, stationed across the perimeter fence, east of al-Boreij, fired many live rounds at Palestinians, on their lands, moderately wounding the young man.

They added that local medics were called to the scene, and rushed the wounded young man, who was shot in his right leg, to the Al-Aqsa Hospital, in Deir al-Balah.

On Friday, the soldiers killed one Palestinian, identified as Tamer Khaled Arafat, 23, and injured 48 others, including four medics and two journalists, in the Great Return March processions, in the eastern parts of the besieged Gaza Strip.