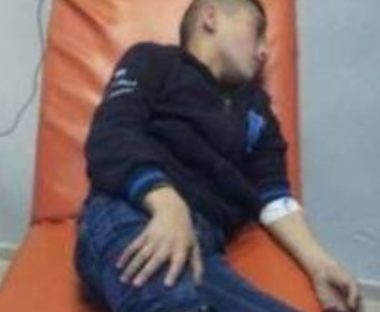 Israeli soldiers shot, Saturday, four Palestinian teenage boys at the entrance of the al-Jalazoun refugee camp, north of the al-Biereh city, in the Ramallah and al-Biereh governorate in central West Bank, and attacked dozens of protesters, following the burial ceremony of a slain Palestinian. Undercover Israeli soldiers infiltrated into Kobar town, north of Ramallah, and kidnapped one Palestinian.

Media sources in Ramallah said the soldiers attacked dozens of Palestinians after the funeral ceremony and procession of a teen, identified as Mahmoud Nakhleh, 17, who was killed by Israeli soldiers after they shot him with live rounds in the abdomen, during a military invasion into the refugee camp, Friday.

The soldiers attacked the Palestinians near the local graveyard, and fired many live rounds, rubber-coated steel bullets and gas bombs at them.

Medical sources have confirmed that the soldiers shot four Palestinian teenage boys with live fire, while many residents suffered the effects of teargas inhalation.

It is worth mentioning that many illegal Israeli colonialist settlers also gathered in the area, near the refugee camp, and opened fire at the Palestinians.

In related news, undercover Israeli soldiers infiltrated into Kobar town, north of Ramallah, and kidnapped Mohammad Maher Barghouthi, 27, from his shop, and took him to an unknown destination.

The kidnapped Palestinian sells electronics in his store, and is related to Saleh Omar Barghouthi, 29, who was extra judicially assassinated by Israeli soldiers, on December 12th, near Surda village, north of Ramallah.