Israeli Soldiers Shut Down Media Outlets In The West Bank 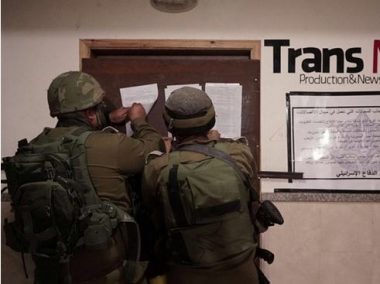 Israeli soldiers, and secret security officers, invaded eight media outlets, on Wednesday at dawn, in several parts of the occupied West Bank, and shut them down under direct military orders, in addition to confiscating equipment.

Some of the invaded agencies are Ramsat, Trans Media and Pal Media, which the military confiscated their broadcast equipment and many machines, for providing services to Palestinian TV stations such as Al-Aqsa and Al-Quds.

The Israeli Military Commander of the Central District of the occupied West Bank, said the stations are “unlicensed”, provide services to what he called “terror elements,” and “engage in incitement.”

The soldiers invaded Trans Media in Nablus, in northern West Bank, and confiscated its equipment, before presenting a military order shutting it down for six months.

The soldiers also invaded the offices of Al-Quds TV, Al-Aqsa TV, Palestine Today, Trans Media and Pal Media, in the southern West Bank city of Hebron, violently searched them and confiscated their equipment, before shutting them down for six months.

In addition, the soldiers abducted Amer al-Ja’bari, the director of Trans Media, and his brother Ibrahim.

In Bethlehem, the soldiers invaded Pal Media offices, in the al-Karkafa area, and confiscated their equipment, before shutting them down for six months.

It is worth mentioning that the soldiers abducted, on Wednesday at dawn, eighteen Palestinians, from their homes in several parts of the West Bank.