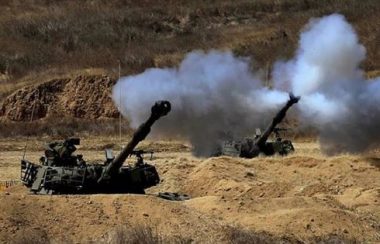 On Thursday at dawn, several Israeli military vehicles, including armored bulldozers, invaded Palestinian agricultural lands close to the border fence east of Gaza city, and Jabalia town, in the northern part of the coastal region, and fired many live rounds while bulldozing the lands.

The WAFA Palestinian News Agency said at least three tanks, and four bulldozers, left Nahal Oz military base, across the border fence, east of Sheja’eyya neighborhood, east of Gaza city, and advanced dozens of meters before uprooting large areas of these lands.

Furthermore, four Israeli vehicles, including a bulldozer, invaded farmlands close to the border fence east of Jabalia, in the northern part of the Gaza Strip, and bulldozed them.

The army frequently invades and bulldozes Palestinian lands, close to the fence in the northern and eastern parts of the Gaza Strip, in addition to installing sand hills, and prevent the residents from approaching them.

On Wednesday evening, Israeli military vehicles, and bulldozers, carried out a limited invasion into Palestinian farmlands, close to the border fence, in Beit Lahia, in the northern part of the Gaza Strip, while army drones flew overhead.

In addition, the soldiers invaded Doha town, west of the West Bank city of Bethlehem, broke into a lathe workshop and confiscated one machine.