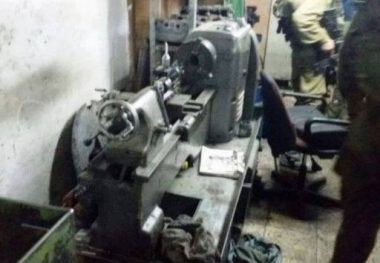 Israeli soldiers invaded, on Thursday at dawn, the town of Doha, west of the West Bank city of Bethlehem, broke into a lathe workshop and confiscated one machine.

The invasion was carried out by several army jeeps, and truck, before the soldiers stormed a lathe workshop, owned by members of Abu Tarboush family, violently searched the property and confiscated a lathe machine.