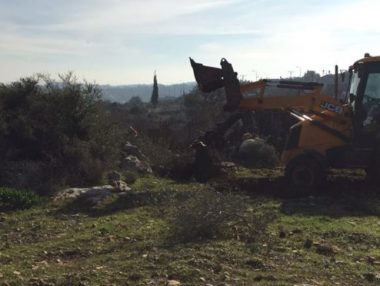 Israeli soldiers started, on Monday morning, the illegal uprooting of hundreds of olive trees, as part of a plan to uproot hundreds of Palestinian trees to pave a new road for an illegal colony, east of Qalqilia, in the northern part of the occupied West Bank.

The WAFA Palestinian News Agency said the orchards that are being attacked and uprooted by Israel are owned by Palestinians from Nabi Elias, Ezbet at-Tabib and Azzoun town.

It added that the soldiers closed the entire area, after declaring it a closed military zone, and prevented locals, international peace activists and even reporters, from entering it.

He added that the attack is just the beginning of the implementation of the Israeli plan to pave a new road that would be used by colonists living in illegal colonies in the district. “Israel is uprooting Roman olive trees that date back thousands of years,” Tabib added, “The Israeli offensive will last for several days and targets more than 3 kilometers of lands.”

The planned 3-kilometer-long colonialist road is planned to be 40-70 meters wide, and will lead to the uprooting of more than 2000 olive trees that were planted at least 500 years ago. Bayan Tabib, a member of the Revolutionary Council of Fateh movement, told the Maan News Agency that the Israeli attack targets the existence of the Palestinian people on their lands, to build and expand colonies, declared illegal by the International Law and the Fourth Geneva Convention.

Bayan added that the Israeli Supreme Court recently allowed the illegal confiscation of 104 Dunams (25.6 Acres) of Palestinian land, after rejecting appeals filed by the Palestinian owners of these orchards.

“This is an Israeli court that serves and protects the illegal Israeli colonialist occupation of Palestine,” he said, “Israel must be held accountable for its crimes and escalating violations – it will never be able to uproot us from our lands, such violations just make us stronger and more steadfast.”

The planned illegal colonialist road aims at linking many colonies with Israel, while Tel Aviv is claiming the Palestinians “will also be able to use it.”