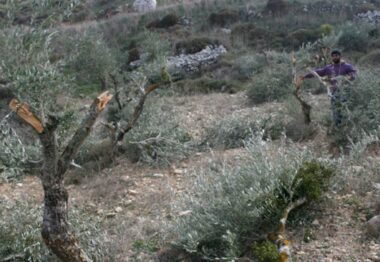 In an ongoing and serious escalation, Israeli soldiers cut and uprooted more than 3400 Palestinian olive trees and saplings, owned by Palestinian villagers of Deir Ballout, west of Salfit, in central West Bank.

The soldiers prevented the Palestinians from entering their lands, and closed the areas surrounding them.

Salfit governor, Abdullah Kamil, said the Israeli violations, committed by the soldiers and fanatic colonialist settlers, have been seriously escalating and called on the international community to intervene.

Yahia Mustafa, the mayor of Deir Ballout, has reported that dozens of soldiers, accompanied by seven bulldozers, invaded Palestinian orchards in the western part of the village.

Mustafa also stated that the soldiers loaded the uprooted trees onto trucks and took them away.

The attacked orchards are in more than 80 Dunams (19.76 Acres) of private Palestinian orchards, planted with hundreds of olive trees, mostly in the past 8 to 10 years.

In August of last year, 2020, the army issued orders preventing the Palestinians from planting and rehabilitating their orchards, located in Area C of the occupied West Bank, and the appeals in Israeli courts are still pending.