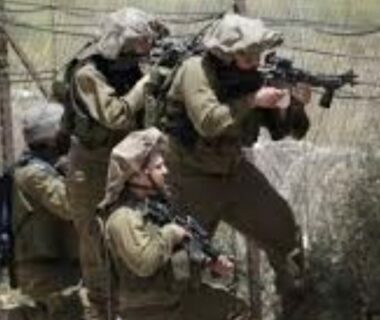 Israeli soldiers fired, on Wednesday morning, many live rounds into Palestinian farmlands in the southern part of the besieged and impoverished Gaza Strip.

Eyewitnesses said the soldiers fired dozens of live rounds into the Palestinian lands, near the perimeter fence across the eastern parts of Rafah and Khan Younis, in the southern part of the coastal enclave.

They added that the farmers had to leave their lands to seek shelter, fearing further violations.

It is worth mentioning that, starting several days ago after the fog settled causing limited visibility, the Israeli army started firing rounds into the Palestinian lands at random, allegedly to prevent breaches through the fence.

The bullets are fired at random and pose a serious threat to the lives and livelihood of the Palestinian farmers, shepherds, and workers.

The Israeli army also carries out frequent assaults and violations targeting Palestinian farmers and workers, on lands near the fence, and the fishermen in Gaza territorial waters.

Such attacks have led to dozens of casualties, including fatalities among the Palestinians, in addition to causing damage to homes, property, and fishing boats, while the soldiers have also abducted dozens of Palestinians and confiscated their boats.