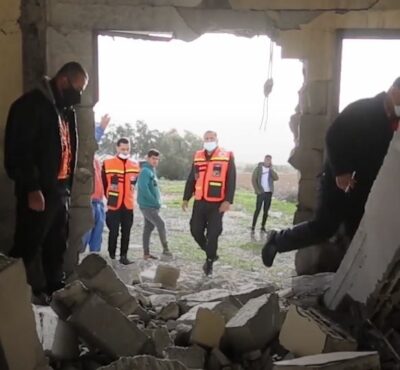 On Monday at night, December 14th, 2020, Israeli soldiers stationed in their military base across the perimeter fence along the eastern parts of the besieged Gaza Strip, fired a shell at a Palestinian home, in Juhr ad-Deek area, in central Gaza.

The shell caused excessive damage to the Palestinian home, but did not lead to casualties.

A family member said that he, and his mother, sleep in that home, but this time they were in his brother’s house, along with other family members, celebrating his wedding.

“It only by the grace of God that we were not hurt, that we were in my brother’s house, celebrating his wedding,” he said, “I always sleep in that room, but thank God, we survived this attack.”

The family denied the Israeli allegations, and said that the soldiers are frequently present in the area, due to its close proximity to the perimeter fence.

“They always see us, see our home, and we see them, there is no way this shell was accidentally fired, especially since it targeted the center of the property,” he added, “It is not an accident; they see us there every day and night. They see us at night with our flashlights checking on our livestock. They know we are here; they see the house.”

It is worth mentioning that, during the 2008 Israeli offensive on the Gaza Strip; the army targeted the home with missiles and shells, and the family later rebuilt it.