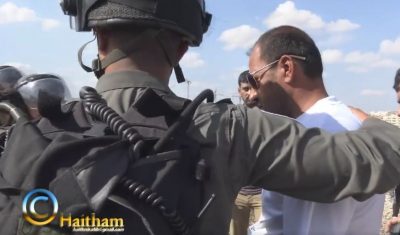 On Friday afternoon, Israeli troops attacked a non-violent demonstration against the Israeli Annexation Wall in the village of Bil’in, in the central West Bank, kidnapping one Palestinian and one Israeli peace activist.

The protest began in the village of Bil’in, and the demonstrators marched down to the site of the Annexation Wall, constructed on village land.

Israeli troops assaulted the demonstrators, and abducted Ahmad Abu Rahma, one of the local organizers with the Popular Committee Against the Wall, and brother of two Palestinians who were killed in separate incidents by Israeli troops who attacked non-violent demonstrations.

The protest was attended by around 60 Israeli and international activists, and 40 Palestinians.

Ashraf Abu Rahma, a non-violent organizer of the Bil’in protests, told the IMEMC that the soldiers kidnapped his brother Ahmad, and told Ahmad that he needed to sign certain documents saying that he would cease participation in protests, in order to secure his release.

Ahmad refused to sign the papers, which were in Hebrew.

The soldiers used their megaphone to call out the name of Ashraf Abu Rahma, threatening to abduct him, and giving him five minutes to leave the area. 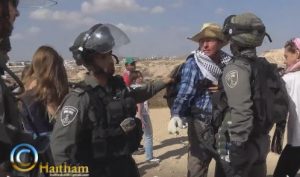 The threats against Ashraf Abu Rahma come soon after Israeli troops abducted him, forcing him to sign a paper stating that he would pay a fine of 15,000 NIS (around $3,000) if he participated in any more protests.

After they called out his name on the megaphone, Ashraf Abu Rahma approached the soldiers and said, “You killed my brother Bassem and my sister Jawaher, and now you are threatening to abduct me. This is the land of Bil’in, this is our land, our trees, our olive orchards, our home.” In response, an Israeli soldier shouted back at him, “No, this is the land of Israel.”

The residents of Bil’in have been conducting weekly non-violent protests agains the Israeli Annexation Wall and settlements constructed on their village land since 2003.