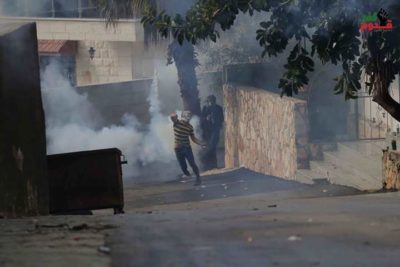 Each week, the townspeople of Kufur Qaddoum hold a march and protest to challenge the Israeli closure of their village’s main road for the past sixteen years. They also protest against the Israeli colonies constructed on land confiscated by the Israeli military from the village.

The coordinator of the Popular Resistance in Kufur Qaddoum, Murad Shtaiwi, told reporters with the Wafa News Agency that the occupation forces suppressed the march by using gas bombs and rubber-coated metal bullets, which led to the injury of a young man with a metal bullet in the face, and another in his hand.

The two were treated by medics in the field, while dozens more were treated for the effects of tear gas inhalation.

The march began after Friday prayers with the participation of hundreds of townspeople, who chanted national slogans calling for an escalation of popular resistance and rejecting the so-called “deal of the century” drafted by Donald Trump’s son-in-law Jared Kushn.er