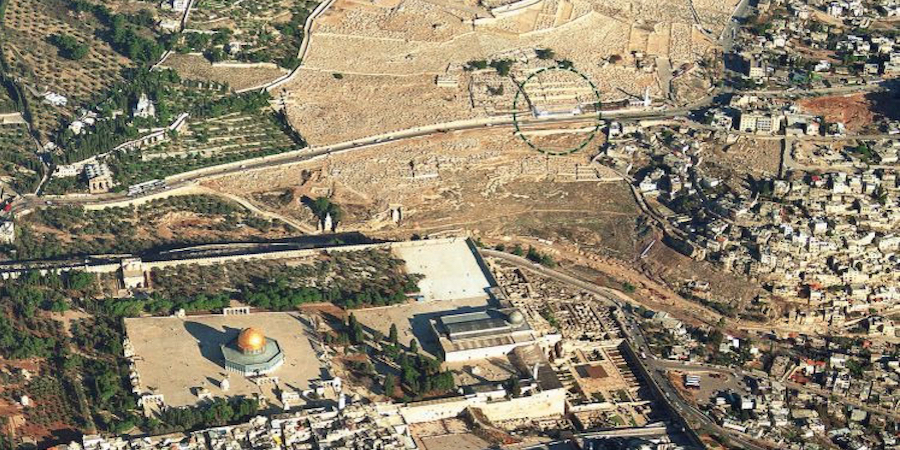 The tourist center is planned to neighbor a mosque in Ras al-Amud that serves Palestinians who are denied access to al-Aqsa Compound.

On April 24, 2017, the West Jerusalem municipality published a plan to confiscate 1,300 square meters of land in Ras al-Amoud, an area adjacent to the Old City in occupied East Jerusalem.

The area earmarked for confiscation is at the bottom of the Jewish Cemetery on the Mount of Olives. Israeli newspaper Haaretz reports that the city envisions a tourist center there, where visitors can “congregate” and “be advised on” the gravesite locations of “family members and famous religious figures.”

Haaretz adds that despite the fact that the plans have yet to be approved, the city has already started working at the site. The public has 60 days to file objections to the plan as of Monday.

But not only is the proposed tourist center dependent on the confiscation of occupied Palestinian land; it will also neighbor the Muhammad al-Fatih Mosque (also known as Ras al-Amud Mosque), which serves local Palestinians and those barred from praying at nearby al-Aqsa Compound.

Al-Aqsa is a compound above the Western Wall in Jerusalem that houses the al-Aqsa Mosque and Dome of the Rock. Since the 1967 occupation, an agreement between Jordan and Israel has maintained that Jewish prayer takes place at the Western Wall plaza, whereas Muslim prayer occurs at al-Aqsa. This status quo allows non-Muslims to visit al-Aqsa as a sightseeing activity.

However, there is a growing movement of Israeli settlers and politicians who work to upend al-Aqsa’s status quo and force it open to Jewish prayer. Organizing Jewish tours to the site with the intention of exceeding sightseeing activities is a key part of these efforts. During such tours, settlers utter Jewish prayers or walk barefoot, as armed Israeli police escorts exact violence and restrict the movement and worship of Muslims and Palestinians. Israeli forces also preemptively bar Palestinians from al-Aqsa by conducting arrests and issuing bans.

Many Palestinians who are prevented from praying at al-Aqsa go to the nearby Muhammad al-Fatih Mosque: in 2009, the Mosque constructed a 70-meter prayer room to accommodate the influx of worshippers that the Israeli restrictions engendered. Facing pressure from settlers, the Jerusalem municipality threatened the room with demolition in 2012 under the pretext that it lacks an Israeli construction permit.

Sheikh Sabri Abu Diab explained to Al-Jazeera why he thought the municipality was so concerned with the Mosque: “the Mosque limits [Israeli authorities’] settlement expansion and is a stumbling block for their desire to connect Jewish cemeteries in the vicinity of the Old City.” Indeed, in addition to being just 300 meters away from the Old City walls, the Mosque lies on a road that leads to settlements in Silwan, as well as Elad’s settlement-cum-archeological-site Ir David.

In this sense, the planned tourist center is not only a new Israeli settlement meant to drive out Palestinians from the Old City and Holy Basin so as to enhance Israeli movement and sovereignty in the area. It is also an extension of the Israeli government’s targeted assault on Palestinian religious rights in Jerusalem – a parallel colonial endeavor that aims to cleanse Jerusalem of its Arab character and adulterate history.

Via the Alternative Information Center (AIC).