Jordan Rejects Any Attempt to Undermine Arab Identity of Jerusalem 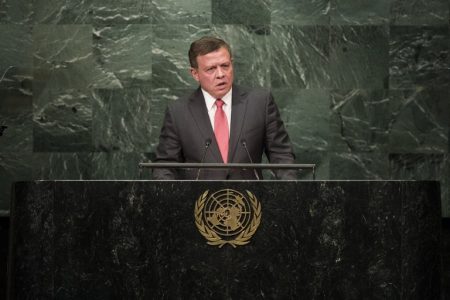 Jordan’s King Abdullah II, on Tuesday, welcomed Archbishop of Canterbury Justin Welby, and reviewed the Kingdom’s efforts to safeguard Islamic and Christian holy sites in Jerusalem, in addition to discussing the latest developments in the Middle East.

The meeting, held at al-Husseiniya Palace and attended by King’s Personal Envoy and Advisor for Religious and Cultural Affairs, HRH Prince Ghazi bin Mohammad, touched on the key role of Arab Christians and their contributions in the region in its past, present and future.

According to Al Ray, the meeting dealt with Israel’s unilateral actions in Jerusalem which threaten Islamic and Christian holy sites, with the King reiterating that Jordan totally rejects any attempt to undermine the Arab identity of the holy city.

Also discussed at the meeting were other current regional issues, particularly the fight against extremism and terrorism, which is not associated with any religion in particular.

The Archbishop of Canterbury commended Jordan’s role to highlight the true image of Islam, expressing his appreciation to His Majesty for his custody and protection of holy sites and the Christian communities in Jerusalem as part of the Kingdom’s custodianship over the city’s holy shrines.