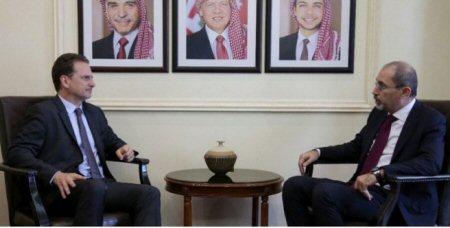 Jordan will host a fundraiser at the United Nations headquarters in New York, next month, to keep UNRWA afloat, the kingdom’s Foreign Minister Ayman Safadi said, on Thursday.

Jordan, in collaboration with UNRWA, Sweden, Japan and Turkey, will organize a conference in support of the agency on the sidelines of the meetings for the UN General Assembly next month.

The meeting, set for September 27 on the sidelines of the UN General Assembly, “aims to provide financial and political support to UNRWA,” said Safadi, according to the PNN.

“Supporting UNRWA is a legal, political or moral responsibility for guaranteeing the right of refugees to a decent living, schooling and health services,” Safadi affirmed.

Safadi said that the New York event aims to “close the gap and put in place a plan that will ensure UNRWA’s continued, ongoing funding for the coming years.”

It will also “reaffirm that UNRWA is an organization created by the UN General Assembly, with a clear and particular role, and this role must continue,” he added.

The top diplomat went on to say: “The question of Palestine refugees is a final status issue that should be resolved in accordance with the International Legitimacy Resolutions and the Arab Peace Initiative.”

Jordan has also called for an emergency meeting of Arab foreign ministers to explore avenues of assistance to the agency.

The United States announced, in January, that it would cut some of its funding to UNRWA, citing a need to undertake a fundamental re-examination of the organization, both in the way it operates and the way it is funded.

The organization has since received pledges of $100 million in additional funding from Qatar, Canada, Switzerland, Turkey, New Zealand, Norway, Korea, Mexico, Slovakia, India and France as a means of making up for the aid that was cut by Washington.

UNRWA recently said it had managed to pay salaries and provide some services, but also said there was still a large budget deficit of $256 million.